Happiness in a vial?

Is it really so easy? Have we found the magical switch that solves, at least at a biochemical level, our existential quest for well-being?

This conundrum is where we find Michel Houellebecq’s hero, Florent-Claude Labrouste, in his controversial contemporary novel, Serotonin.1 Let’s follow him through, as a character, leaving aside politics and other highly-debated sensitive topics:

The title almost wishes to boil the modern quest for happiness down to its conventional neurobiological value: serotonin. 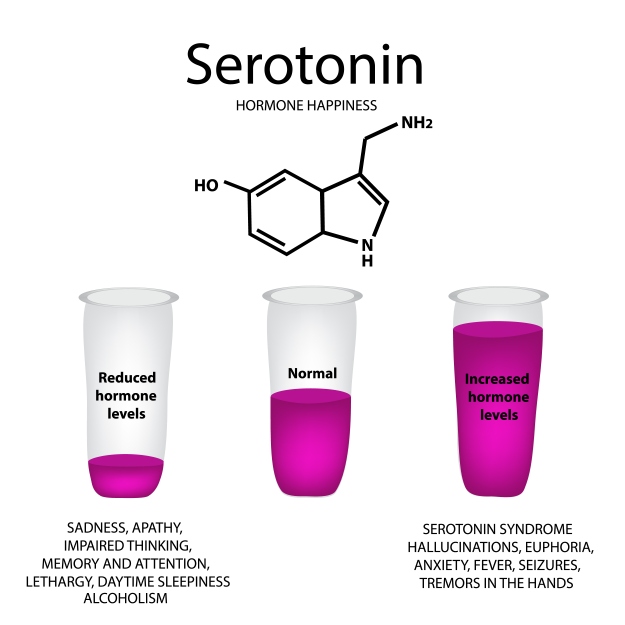 This highly valued neurochemical hasn’t enjoyed this kind of recognition early in its discovery, and may still be far from being properly understood and appreciated. Interestingly enough, none of the scientists that first discovered it, and, through joint efforts, described it, actually found it in the brain. Vittorio Erspamer found it in the gut, while Irvin Page found it in the blood vessels. It was discovered rather as an accident while trying to find a cause for hypertension. An artifact that prevented scientists from adequately assessing other chemicals in the blood was what set the foundation for the field we today know as neurochemistry. Back when acetylcholine and norepinephrine were the only agreed-upon neurotransmitters, serotonin was the proof-of-concept that incentivized scientists to look for others thoroughly. 2

Labrouste finds himself in a circumstance we can understand, perhaps a bit too well: he has not found true meaning in life, but somewhat decayed into the opposite, both professionally and personally. Common distractions, artificial values created by modern society to give us a sense of achievement we long for, do not satisfy him anymore.

Are we the most advanced species to date, happy? How do we quantify this, and how do we compare and contrast to, say, past civilizations? One would expect that, with technology and health advancing at a faster pace than we can often comprehend, we’d automatically live longer, happier lives. The former is right — the latter, debatable.

Another popular contemporary writer and historian, Yuval Noah Harari, reflects upon happiness in the modern age.3 Although human progress in history is undeniable, it is not clear whether it necessarily meant more and more joy. We have constantly been adapting to our own revolutions (be it agricultural, industrial, informational), which brought us to the state of the modern man: having the intellect, the information and the means to do almost anything, and yet unsure how to employ them in order to fulfill his most basic desire for happiness. Lacking perspective of our actions as a species, caught between the promise and the costs of our advancements, we seem far from the promise of perpetual joy.

Labrouste has to keep himself medicated with antidepressants just to cope with day to day life, as he feels he is “dying of sadness.” 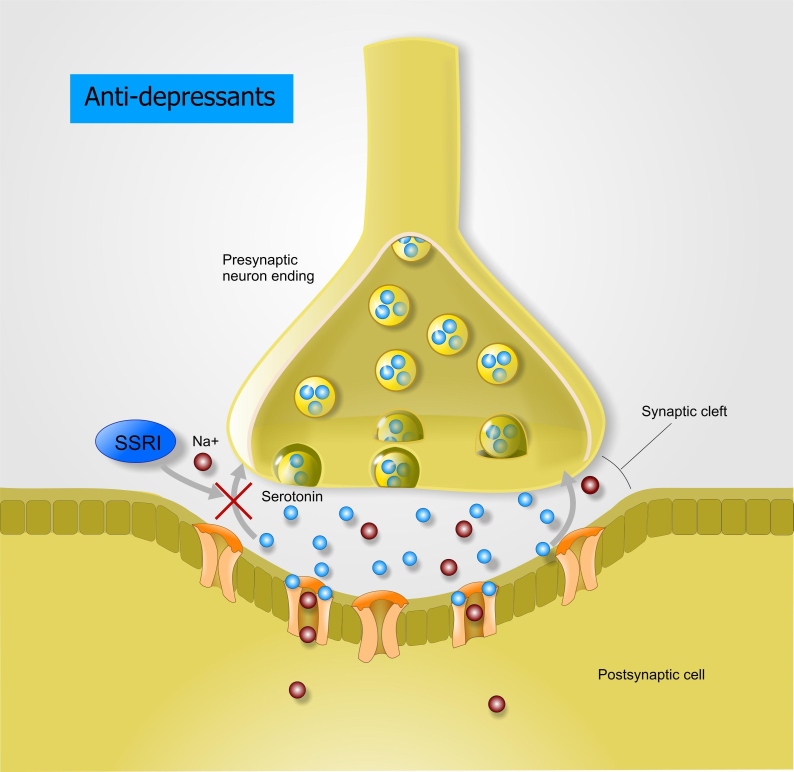 Serotonin’s role in mood regulation and depression has gained the popularity we witness today mostly due to its absence – that is, through depression, more specifically, a class of antidepressants called SSRI (Specific Serotonin Reuptake Inhibitors). Intensely marketed during the 1990s4 as an alternative to treat depression easily, with fewer side effects, they work by slightly altering synaptic transmission. Typically, serotonin is released from the pre-synaptic neuron, and it acts on the post-synaptic neuron. For the transmission to stop, serotonin is eliminated through several mechanisms, one of which is being caught back into the pre-synaptic neuron. SSRIs block this process, thus prolonging the effect of serotonin in the synapse. They are today the most widely used antidepressants.

As we gain more insight, we understand that the pathogenesis of depression does not start and end with serotonin. The neurogenic theory of depression, constantly debated since 2000, postulates that what is ultimately impaired during the course of this ailment is the generation of new neurons in the hippocampus and that antidepressants act by stimulating neurogenesis. Here, serotonin is not the result, but rather an intermediary step.5

Labrouste decides to leave this modern, unhappy life and return to Normandy, a place where he recalls being better, in love, happy. He fails to recapture that state.

In the novel, the government and other external factors are to blame for Labrouste’s inability to find his peace of mind. But is that the whole story?

It appears not necessarily the serotonin levels, but the distribution of serotonin receptors may be naturally altered with age6, potentially even associating behavioral changes. 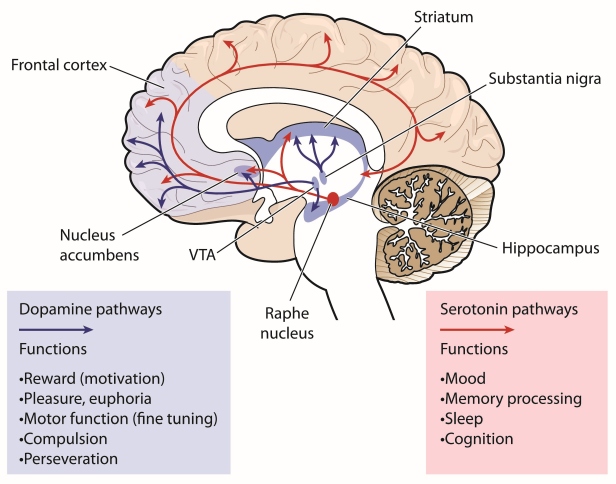 Furthermore, as we refine our understanding of serotoninergic systems and their ramifications, we come to realize that serotonin’s action is in no way straightforward. Although it is a rather widely spread neurotransmitter within the brain, cell bodies of the neurons that secrete serotonin are gathered in the raphe nuclei. These nuclei can be further divided into systems and subsystems, as different neuron populations seem to give rise to different behaviors. Such is the case that neurons projecting to the frontal cortex may promote an adapting, beneficial behavior in a stressful situation, while neurons projecting to the amygdala will promote anxiety and inability to cope in the same context.7

A simplistic understanding of serotonin as a neurotransmitter may often prove ignorant. Phylogenetically speaking, it is remarkably old. Found in most metazoa and even some protozoa, its most former known role is that of an intracellular regulator of cell activity, adapting the cell to external conditions. Along with other biogenic amines (adrenaline, noradrenaline), it then started acting as a hormone, guiding cell proliferation and differentiation. Later in evolution, it acquired the role of neuromodulator – produced and secreted by specific neurons to modulate the general activity of large groups of other neurons. Ultimately, it took the last and probably the newest evolutionary step, gaining the function of neurotransmitter – acting on specific receptors to generate fast post-synaptic potentials. However, serotonin seems to maintain all of its ‘pre-nervous’ roles along with the new ones.8

Most serotonin in our bodies is not even found in the brain but in the digestive system. Secreted by a special subset of cells (enterochromaffin cells), it regulates bowel motility. It seems to act on almost every organ, modulating heart rate and respiratory drive, promoting blood clotting, inducing vasoconstriction or dilation, mediating stress responses, and with a variety of effects on both the male and female reproductive systems.9 We must not forget its role during embryogenesis and neurodevelopment.10 Recent evidence even involves serotonin in regulating metabolism, only adding on to the myriad effects it exerts outside the nervous system.11

Achieving true happiness, however, like Aldous Huxley’s fictional drug, soma12, from his dystopian Brave New World, seems to be far from its potential capacities. The correlation serotonin level-happiness is non-linear. While a deficit in serotonin gives rise to depression-like symptoms, excessive serotonin may cause hallucinations, anxiety, fever, hypertension, excessive sweating, and tremor.13

Evolutionary biologists may argue that, in the grand scheme, perpetual happiness would make no sense, to begin with. Persistent joy would counter a basic biological fact: we respond to changes in incoming stimuli, rather than magnitude. If the stimulus is maintained, constant, sensitivity adaptively decreases. A ‘hedonic accommodation’ would mean that emotional responses to a pleasant stimulus progressively weaken as long as it remains constant. We are driven by trying to find that sensation again, motivated by perpetual dissatisfaction to overcome challenges and sometimes ourselves.14

Darwin noted that all animals are driven by ‘good’ emotions, reinforcing behaviors that create a satisfactory result. However, with the emergence of self-awareness, we have taken this one step further, using emotions as a new evolutionary force, purposefully chasing the ‘good’ in itself. Ultimately, understanding this means understanding that serotonin, among other ‘happy hormones’ (dopamine, endorphins, oxytocin) is just a means to an end, a mechanism to potentiate our behaviors, and, unfortunately, not the biochemical solution to a good life.14

If we are to take advice from Aristotle’s 2,500 years old Nicomachean Ethics, there are no shortcuts – to live a good human life, we must strive to be virtuous, take satisfaction in good deeds, create and enjoy a comfortable environment for ourselves, learn from other good people and do our best to be perpetually aware, contemplating and learning.15