Split-brain: multitudes within us

Unlocking multitudes within us

One can often find pieces of profound understanding of human nature in the depths of common idioms. “I’m not feeling like myself today.” What does this mean? Sure enough, we employ it to convey that we are not feeling quite well, or not at our fullest capacity, in short, that we are not the person we most commonly identify ourselves with. But how do we build this standard image in the first place? Do we actually have control, or is it something that develops helplessly from our subconscious? And, most importantly, who’s to say there is only one standard in the first place?

At our hearts, we are conflicted. We are masters of numerous subprograms that run simultaneously to achieve different goals. This is why we are put in a position to constantly make decisions. Some parts of us want the comfort of our home, while others crave the adventure and the unknown. A part of us wants to conserve energy in bed in the morning, while another is motivated to be productive and ensure living expenses. Portions of our brain are in conflict several times a day until we eventually reach a decision, and one pathway becomes dominant. This is true of everyone, so what is it that actually keeps us together, and what happens when it fails? 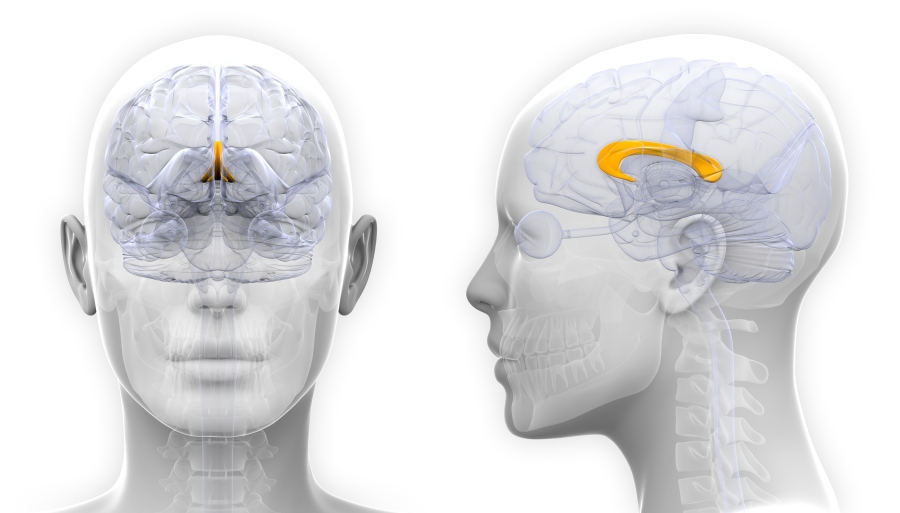 The largest structure that connects the two halves of our brains is the corpus callosum. It is made up of approximately 200 million fibers and seems to be a relatively recent acquirement in mammalian evolution. Its primary function is to allow hemispheres to communicate with each other, linking areas that perform the same function, in order for the brain to act as a coordinated structure. We can even see how, from the front to the back, its fibers connect different homologous regions: the prefrontal lobes and motor areas in the front, the sensory areas in the middle, the temporal and occipital lobes towards the back.1,2

The first ideas that parts of the brain could “behave” differently came around the 1960s, with the first attempts at “split-brain surgery” (Roger Sperry & Ronald Myers, Joseph Bogen, Michael Gazzaniga)3: sectioning the corpus callosum as a last resort for patients with severe, refractory epilepsy. The results were, at first, oddly normal: no significant deficit was observed in motor control or behavior after the procedure. It was only after specific tests were employed to only stimulate one hemisphere, and not the other, that effects started to manifest. They could draw different figures with each hand simultaneously. Objects that were selectively presented to either the right or the left hemisphere (by covering one eye or the other) were processed and interpreted only in their respective hemisphere – when asked to pick up what they just saw, they would pick one object with their left hand and another object with the right. Words could only be remembered if presented to the left hemisphere, where the speech and language area rests. In short, it was as if patients had two independent, functional brains, but disconnected from one another.4 More fascinating experiments performed by Michael Gazzaniga in 1978 showed how even in the context of erratic, disconnected behavior, the brain still tries to place it in an unanimous context. Split-brain patients were simultaneously shown a chicken (left hemisphere) and a pile of snow (right hemisphere). When asked to pick up corresponding cards, they chose a chicken with the right hand and a shovel with the left; then they were asked why they had picked up the shovel (keep in mind that the left, language-dominant hemisphere, had no access to this information). Quickly enough, a story was fabricated, taking into account only the information that was consciously available: the shovel is required to clean the chicken shed. 5,6

It is worth mentioning that, although the corpus callosum is the largest structure that connects the two halves of the brain, it is not the only one. Even by cutting out the corpus callosum, some residual connections can still be made through the anterior and posterior commissures. This is why information that is supposed to crossway in order to be transmitted, such as controlling and feeling the right hand with the left hemisphere and vice versa, is still properly transmitted. What happens, though, is that it stops both hemispheres from having a say in the final result. Such as, for example, an image from the left eye is properly sent through its tract to the right hemisphere, but not to the left one. Technically, it is only “seen” by half the brain. The other half would need input from the right eye even to acknowledge its existence.

The procedure of corpus callosotomy (sectioning the corpus callosum, either partially or completely) is still a part of the surgical therapeutic options in epilepsy. Although it employs different techniques, such as laser interstitial thermotherapy, or even robotic surgery, the principle stays the same: sectioning the connection between the two hemispheres in order to limit the extreme electric activity of the epileptic seizure to only one half of the brain. The procedure is a palliative one, catered at patients with severe chronic crises, that do not respond to medication and for which a precise site of initiation cannot be found. It can result in significant improvement, with crises becoming less severe in up to 74% of patients.7 It does, however, come with its potential adverse effects, including surgical complications, transient or permanent neurological deficits, memory deficits, neuropsychological impairment, and the so-called “disconnection syndrome.” This basically encompasses the same symptoms observed in the initial split-brain experiments: most commonly, objects cannot be named, although they are recognized, if not presented to the language- dominant hemisphere and the nondominant hand does not respond reliably to verbal commands. More severe symptoms have been observed, such as neglecting objects in half of the visual field, difficulty coordinating, mutism. A particularly distressing side-effect is alien hand syndrome when the patient’s nondominant hand seems to act without his will or conscious decision (unbuttoning clothes, moving or throwing objects, violently striking the head or other parts of the body). It can go as far as requiring the patient to use his dominant hand to restrain the alien hand’s actions, and it often also affects the nondominant leg, causing difficulty walking or even walking in the wrong direction.2 Interestingly enough, if the corpus callosum is absent from birth (corpus callosum agenesia), these disconnection patterns are not as important. Through its innate plasticity in the early years, the cortex manages to reorganize in order to connect its substructures.1

Sometimes, we don’t even need to go that far to observe different behaviors emerging from the same brain. More familiar disinhibition techniques, such as alcohol, have achieved a similar result. Such is the example given in “Incognito: The secret lives of the brain”5 by David Eagleman, who recounts Mel Gibson exhibiting a completely inappropriate, uncharacteristic anti-Semitic behavior after alcohol consumption - one which himself did not recognize as part of him when sober. But this poses the question: is it the effect of alcohol, or a subsidiary personality waiting to emerge when conscience is dull and connections are slow?

Taking into account the amazing disparity we have seen, greater concerns come into view: are the two halves of the brain “aware” of themselves and each other? Do they actually exhibit individual behaviors and personalities, that normally get mixed or repressed to attain a single end-result? There is no certainty. Although this concept was hinted at early on by Roger Sperry, and further consolidated by V.S. Ramachandran at a conference in 2006, when he presented a patient whose right hemisphere was a theist and left hemisphere atheist, recent studies seem to disagree.8

All in all, the available research and intriguing experiments in this field seem to raise more questions than they answer. Split-brain patients have provided the ideal model for studying the role of the corpus callosum and how the two otherwise identical hemispheres can have their different popular roles: the right hemisphere is best at spatial representation, recognition of objects and faces, timing, as well as empathy, humor and depression; the left hemisphere is responsible of language, logic and mathematical skills. The degree of this separation, however, is still under investigation.

Is the corpus callosum the bridge that keeps all this together or a form of limitation against the full capacities of our brain? In terms of daily activities, we require quick decisions and purposeful coordination of our actions. But in terms of sheer processing power, what would it mean for us to be able to distinctly train and employ our separate hemispheres, potentially doubling the number of tasks we perform at a certain time? Ultimately, would this make us more or less intelligent? This depends significantly on our understanding of intelligence – are we intelligent because of our capacity to process large pieces of information, or is it precisely the connection, the insight, the resolution of the system into one solution or one answer that makes us who we are?