Understanding what drives us

All human behavior has a reason. All behavior is solving a problem.

Regardless of whether we are aware of it or not, each and every one of the motor programs designed within our prefrontal cortex is based on some form of intrinsic reasoning.

We could not afford the time, evolutionarily speaking, to keep pursuing random behaviors. A method had to be put in place early on to direct us down the right path towards species preservation, survival, and even improvement.1,2,3 We think of these as instincts, or forms of motivation.

A significant amount of contemporary neuroscientific work focuses on defining and understanding the circuitry that underlies reward, and how this manages to shape behavior to not only meet physiological needs but also relate to the environment, handle challenges and take advantage of opportunities.3

With evolution, the concepts of pleasure and reward gained a different level of meaning. Language is a fair witness to that. The English word hedonic has its roots in the ancient Greek word for pleasure [ἡ δονή], which in turn was derived from the word for sweet [ἡ δύς]. Today, it encompasses many areas from which we draw pleasure – sensory, but also cognitive, social, aesthetic, and moral 3. Although we may have refined our rewards, the way we process them is reasonably consistent. Let us take a closer look. 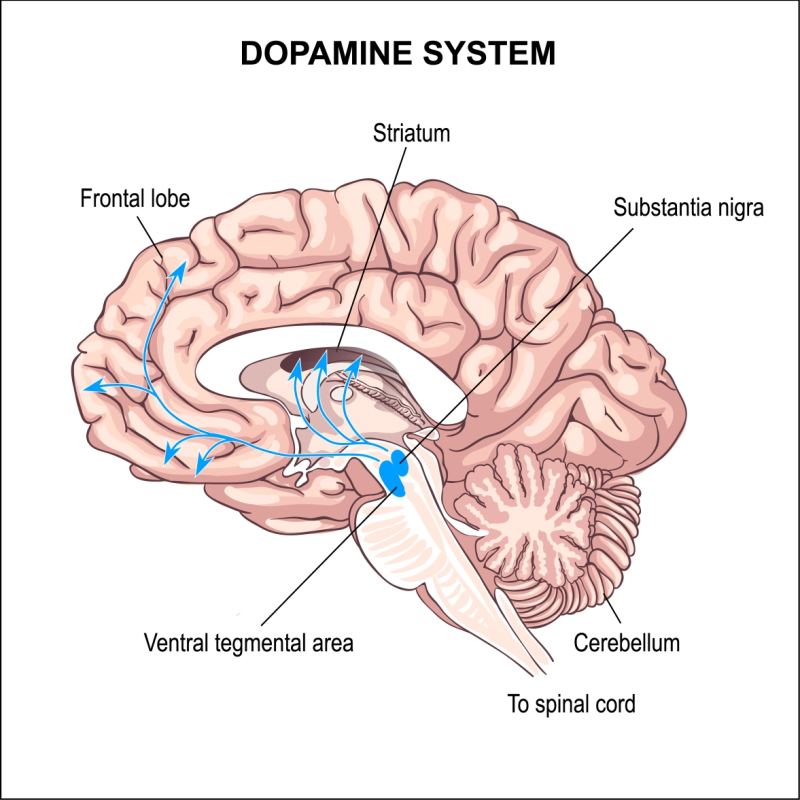 A future rewarding stimulus may come from almost anywhere. We can start from a pleasant smell, taste, or emotion, for example. All these converge into a common pathway2,3 to generate what we call a reward, and this common path has been defined as The Reward System. It starts in an area within the brainstem called the ventral tegmental area (VTA), where dopamine-secreting neurons are located. The circuitry is pretty complex, but 2 main pathways project towards the nucleus accumbens (mesolimbic pathway) and towards the prefrontal cortex (mesocortical pathway). How intense this dopamine stimulation is correlated with how much we will want to pursue that reward again or repeat that behavior. In a word, motivation.4

Once we figured this circuit out and were able to place a pin in it (or, rather, an electrode) the effects were astounding: In the first experimental design employing a brain stimulation reward, rats ended up pressing a lever that would electrically stimulate specific sites in their brains for hours on end.5 Some later studies even proposed that they would rather keep pressing the lever than eat or hydrate, although these failed to be confirmed. With time, the animals seemed to find some form of equilibrium between ensuring their fundamental needs and lever-pressing.6

Such concepts have undergone human trials through the controversial experiments of psychiatrist Robert Heath. Aiming to locate and cure diseases such as epilepsy, schizophrenia, and depression by deep brain stimulation, he found that the patients would voluntarily press electrodes implanted in specific sites up to hundreds or even thousands of times per session. The added benefit of his experiments was finding out what patients were experiencing upon stimulation, with his famous B-19 subject describing “feelings of pleasure, alertness, and warmth”.7 Discovering the so-called pleasure centers of the brain did not, however, end up curing psychiatric diseases.

As we gain more insight, we come to understand that a reward is not a single unit or neural process. There seem to be substantial differences between the act of wanting something and that of liking it. So much so, that several experiments managed to disturb one, but not the other function by precise neurochemical lesions. The current hypothesis states that dopamine and the classical reward circuit actually mediate wanting something while liking it is under the control of small hedonic hotspots – usually employing the opioid and endocannabinoid systems. 3,8

Furthermore, the circuit is regulated and adapted to the exterior context. A region within the frontal cortex, the midanterior site, seems to dictate how much we subjectively enjoy a particular sensation. This is why we can’t, for instance, enjoy a good movie while we’re hungry, and also why overeating of anything, even our favorite food, will make us no longer desire it in the end.7,9

Reward and its associated circuitry are believed to serve four main functions: learning, approach behavior, decision-making and pleasure.2Learning is a highly-praised capacity in itself, allowing an organism to better respond in certain environmental conditions based on its previous experience. A reward is fuel for this whole process. An example that quickly comes to mind is Pavlov’s experiments – repeatedly ringing a bell before feeding a dog ultimately makes it salivate just upon hearing the sound. This form of associating a stimulus (the bell) with a reward (food) is termed classical conditioning. When a specific action must be performed to obtain the reward, such as pressing a lever, we term that instrumental or operant learning.2

We are subjects of instrumental learning on a daily basis. We go out, drink, have trips in order to attain a rewarding state, one that we have experienced before in a similar circumstance. Getting to perform such activities usually also entails a certain amount of effort on our side, an approach behavior. We may even find ourselves in the situation of choosing between two distinct rewards, requiring our decision-making. Ultimately, we jump through all these hoops in order to elicit the positive emotion a reward gives us, often in the form of pleasure.2

With our curiosity and resourcefulness as a species, we quickly started voluntarily chasing pleasure, and, even before we knew how these worked on a fundamental level, hacking the system. Drug addiction is a prime example of us purposefully skipping the behavioral ‘formalities’ in order to go straight for the reward. In itself, administering the drug then becomes a very efficient reward-producing behavior, entering the vicious circle we are familiar with.

Drug administration has become the main model for pursuing reward. So much so, that we have used it to try and get to the molecular bottom of the problem. If dopamine is indeed what fires this behavior, can we stop it by blocking dopamine receptors? In part, yes. Suppressing dopamine neurotransmission indeed seems to reduce the desire to consume a drug, but not the pleasure it creates.4,8 Understanding this led the way to the Incentive-Sensitization Theory of addiction – stating that drug-administration induces a persistent hypersensitive state in the reward circuit, creating a pathological motivation (wanting) for drugs.8

In a world suffocated by sources of quick satisfaction and easy fixes, this neurobiological basis is just part of the story. Addiction is a worldwide epidemic. Be it a commonly accepted drug, tobacco, alcohol, or sugar, the modern man searches for solace in these forms of behavior and frequently ends up pathologically reinforcing them. Deeper issues lie underneath. The psychological component has just as much of an influence as the physiological one, and many argue we should view it as a consequence to the feelings of disconnection such an overly-connected society has paradoxically created.10,11

Another instance where we meddle with the dopaminergic system is that of Parkinson’s disease. In an attempt to supply the dopamine patients can no longer synthesize within their own substantia nigra (a different area of dopamine-secreting neurons, mostly involved in movement control), we administer dopamine agonists. Subsequently, patients seem to regain their motivation and motor control, but also have a significantly higher risk of pathological gambling among other impulsive control disorders. In some patients, treatment may even instill a drug addiction-like state, characterized by an excessive desire for dopamine medication.12 This serves to show that, although dopamine’s roles go far beyond the reward circuit, the latter seems to follow dopamine wherever it goes.

Ultimately, many of our issues as a modern society, and at the same time our identity as humans, depend on us properly understanding reward and motivation, as they constitute the fuels of our actions, the drive behind our behaviors.